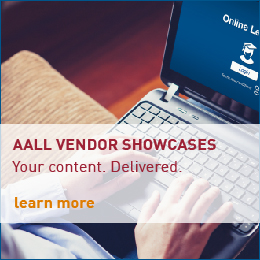 The CONELL experience begins early. To attend CONELL, you'll probably be arriving at the convention on Friday night, so CONELL begins with optional Dutch Treat dinners. The CONELL committee makes group reservations at a number of restaurants close to the convention center. We then publicize the names of the restaurants on the CONELL listserv, and you choose which group you want to join. On Friday night, you meet your group at a pre-arranged spot and walk to the restaurant. The committee arranges in advance to have separate checks presented to the group. It's a great chance to make a few friends before the official program even begins!

On Saturday, the official program kicks off with registration and continental breakfast. Through the morning you hear a number of speakers who will orient you to AALL as well as letting you in on the secrets of getting the most from your convention experience (one popular tip, get the goodies!). In a testament to the importance, we place on our newer members, the president of AALL welcomes you to the convention, and any AALL board members who can take time from their busy schedule, come to meet you as well. Board members lead small group sessions on AALL and allow time for CONELL attendees to ask questions. After listening to the speakers, you will break into two groups for the CONELL marketplace and speed networking.

AALL's 5000 members have widely varying interests that are served by a plethora of interest sections, committees, working groups and other entities within AALL. CONELL's marketplace gathers these groups in one place to showcase their services and missions. No matter what your special focus is, you'll probably find a group to match. (The Dancing and Knitting Special Interest Sections have never exhibited at CONELL, but we're trying.)

Aside from the food, this is CONELL's most popular offering. Two rows of chairs are lined up facing each other. You have a three-minute conversation with the person facing you and then one of you moves on. Not time to learn anybody's deep secrets, but enough time to place a face with a name and learn a few basic facts so that you'll have people to say hello to throughout the convention, and who knows, throughout an entire career!

More time to meet more people. The food is good too!

Saturday afternoon is spent in the company of your new-found friends as you hop on a bus and check out what's best in the host city. Past tours have highlighted natural wonders, architectural beauty, and interesting history, maybe mixed with tips on the hottest night spots and the best restaurants! Best of all, it's one more chance to mingle with your colleagues.

What to expect from CONELL? Learning. Good food. Fun times. New friendships, some lasting a lifetime.