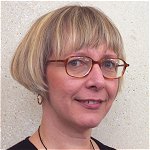 Following the delivery of reports by numerous committee Chairs and Representatives at the TS annual business meeting, the Renee D. Chapman Award was presented to Melody Busse Lembke by Alva Stone.  Herewith is a “record” of the presentation with Alva Stone.

Mike Petit (outgoing Chair of the TS SIS): “And finally, as our last item of business today, I call upon Alva Stone to come up and present the annual award for the section.”

ALVA STONE (AS): “Thank you, Mike. As many of you will remember, the Technical Services section has established this award in memory of Renee D. Chapman, former head of Technical Services at the Law Library at SUNY-Buffalo; Renee also served as Chair of TS-SIS in 1888-89.”

AS: “Did I say 1888? Ooops! I mean… 1988 to ’89 ! Anyway, this award is meant to recognize “extended and sustained” service to technical services law librarianship and to Double-A-Double-L. Well, I don’t think I can build up any suspense here, since it’s already been reported in the AALL Newsletter as well as in a handout that came in your registration packet — that this year’s recipient is Melody Lembke.”

TS: [enthusiastic applause, also extended and sustained. Alva shifts from foot to foot, while the correct pronunciation of “Busse,” as given to her by 9-year-old Andrew Lembke, dances in her head…]

AS: “I am especially pleased to have been asked to present the award this year, because I feel a special affinity with Melody. She and I are the same age. (Well, OKAY!, I am a few weeks older than her, if you must know.) And, well, the fact that this conference is going on at the same time we’re trying to watch the Olympics in Atlanta — it reminds me of another time when sports history was being made. It was 1985. I was new to law libraries, so I attended the AALL Basic Cataloging Institute at Cornell that summer. I met Melody there; she was on the faculty of the Institute. We found each other, having a common interest in tennis, in the basement of a Cornell dormitory watching the rec room TV in amazement as an unknown German teenager, Boris Becker, went to the men’s finals and won the tournament at Wimbledon!”

“Melody has also been an inspiration to me in another important way. Like her, I’ve also spent 20 years in the same place, since in my case, I worked as a cataloger at FSU’s main library for 10 years before going to the FSU law library. But Melody has proven by her example that you can achieve great accomplishments even while you stay in one job — you don’t have to move around every few years or continually rise to “higher” positions in order to contribute to and have an impact of the profession.

AS: It’s also nice to be able to present this award to Melody this year, since this is a kind of homecoming for her. She got her B.A. degree at Purdue, and her MLS at Indiana University, and here’s her Mom with us today, up from southern Indiana! [Her two sons, Andrew and Tim, were also present.] Now, I could read you a list of all the reasons why we think Melody deserves this award … but, tell the truth, I’d rather ask YOU some rhetorical questions. And I’ll tell you straight off, that the answer to every one of the questions is “Melody.” So I want you to give me the answer, Mel-O-Dy, and say it loud, say it clear…”

AS: “Who has written the “Description and Entry” column in TSLL newsletter for over 14 years?”

AS: “Who was the first practicing cataloger to serve a three-year term on the AALL Executive Board?”

AS: “Who was chair of the Technical Services section in 1984, and was also the very first SIS Council chair the following year?”

AS: “Who is co-author of the AALL publication series title, Cataloging Legal Literature, which has influenced law catalogers all over, and will soon be out in its third edition?”

AS: “Who has proven that you can stay in one library for 20 years and you don’t have to become a director in order to rise to the top in the eyes of your peers?”

AS: “Who has participated in at least seven programs, workshops, or AALL institutes, most recently instructing us on how to handle dead authors who are reincarnated on law book title pages?”

AS: “Who served on the Search Committee for AALL Executive Director in 1988, and who chaired the AALL Nominations Committee in 1995?”

AS: “Who comes ‘home’ to Indiana, and brings her whole family to a business meeting of the Tech Services SIS ?”

AS: “Very good, you guys! There’s just one more thing I need your help on. If you are of the same generation as me and Melody, you might remember the theme song to a popular TV show we all watched when we were kids. Now, sing along with me, as I point to the letters and words on the plaque, to the tune of the Mickey Mouse song …”

AS: “Okay, let’s stop embarrassing Melody and give her her plaque. But I should mention that Richard Amelung was really the chair of the Awards Committee this year, but he couldn’t come to Indianapolis. Oh! and Reggie Wallen was also on the Committee, and she’s not here either, that’s why you got stuck with me Congratulations, Melody!”

[Melody steps up to the podium, receives the plaque, and says…]

MELODY: Putting my thank you on paper to Alva Stone’s presentation gives me the opportunity to make it more complete. I didn’t have notes so this is an approximation of what I said, so for those of you who were at the Technical Services meeting the following may sound slightly different!

My thanks to Richard, Alva, and Reggie for selecting me to receive the Renee D. Chapman Memorial Award. I am honored to be associated with Renee’s name. For those who didn’t know her, she was not only intelligent, organized, and met deadlines faithfully, she was also a very nice person. I also admit to a great feeling of pride in having a technical services person’s name on the award brochure that annual meeting registrants received.

Alva’s presentation was probably one of the funniest and most embarrassing I’ve ever experienced. She picked the “Mickey Mouse” song, and didn’t realize that many a time my sister Mickey came home with a black eye after someone had taunted her with that song. My husband and I are originally from Indiana. Receiving this award here was an added bonus as it allowed my mom, Billie Busse, to come to this presentation. I brought my sons, Andrew and Timothy, so that they could spend the convention week on the farm with Grandma. They have been bugging me for a day and a half as to when I was going to let them out of this hotel so they could go to the farm. And now I’ve made them sit through a torturous meeting of incomprehensible acronyms. [There was a nomination from the floor that they receive an award for sitting through the TS business meeting.] Of course, I have to mention that I refer to them as my Executive Board Babies [nine year old Andrew put his head in his lap in embarrassment] since AJ was born when I was elected, and Tim during my second year on the board.

Alva mentioned several times that I’ve been at the same place a long time. I often blame my husband for much of what I have accomplished. [He came on Thursday post- convention to vacation with our relatives.] Mike put in a tremendous number of hours as a new attorney; I got active in professional activities to keep myself out of trouble while he was working. He also likes California law which limits my territory for job searching. At least with my job I know a tort from a torte. An when you work for an institution the size of LACLL who needs more challenges?

Peter Enyingi is also the reason for so much of what I’ve done. He knew when an editor was needed for the Law Cataloger; he encouraged me in this my first participation in AALL activities. He had tried for years to put together a committee to do a “Cataloging Manual.” When Rhonda Lawrence came to LACLL, we finally had the group to do Cataloging Legal Literature. I inherited the Legal ..Weekly Lists as well from Peter when he retired. Rhonda and I are now stuck doing the 3rd ed. of CLL by ourselves which has taken much longer than we anticipated!

Of course, in addition to Peter and Rhonda there have been many other AALL members along the way who have worked with me on projects: from Kate Pecarovich and instructors on the 1992 Cataloging Institute, to John Hostage, Lenore Rapkin, and Jacqui Paul on the Constitution Heading Task Force this past year, to name just a few of them. For all the others of you who have shared the learning, joys, dances, and burdens along the road these many years, Thank you.