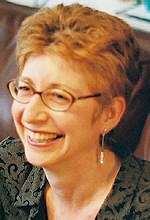 The TS-SIS Awards Committee is pleased to announce that the recipient of the Renee D. Chapman Memorial Award for Outstanding Contributions in Technical Services Law Librarianship for 2011 is Yael Mandelstam.

Ms. Mandelstam is the Head of Cataloging at Fordham University School of Law Library in New York, New York.

Some of her contributions include:

*Listen to Yael Mandelstam's remarks from the Chapman Award presentation.

Good afternoon, I am honored to have been asked to co-present the Rene D. Chapman Memorial Award for Outstanding Contributions in Technical Services Law Librarianship to Yael Mandelstam. Glad I got the name of the award correct. Early in the process of nominations, I kept on referring to the award as the Mary Chapman Award. Those of you of a certain vintage in TS-SIS will remember Mary, a long time technical services librarian at NYU Law School, quite respected, but NOT the Chapman after whom this award was named! Now we have that out of the way...

For those of us in this room, it may be hard to remember a time when Yael was NOT a primal force in our field-no disrespect intended to the many superb law catalogers and technical services librarians who have been with us for longer. I say this because Yael has managed to accomplish so much in our field, so quickly. I will enumerate a few of the outstanding accomplishments, of which many or most of you are aware.

Yael has chaired several projects and groups, not only within law librarianship but within the larger cosmos of cataloging and metadata. Lucky for me, I've served on many of her committees. Often Yael asks me to join a task force or group she is chairing. I always accept-first, because it's an offer I can't refuse, and second, because I know that the work will be stimulating, and that ANY task force she is leading will accomplish what it's supposed to do (and probably more). Those of us who have served in groups with ineffectual leaders know how frustrating that can be.

A few years ago, for a change, it was the other way around. I co-chaired the Provider-Neutral E-Monograph Record Task Force with Becky Culbertson, and I asked Yael to join. The three of worked together synergistically. When it came to any aesthetic decisions-the other co-chair and I quickly learned to "just leave it to Yael." This makes sense, because Yael's first choice of career was as a fashion designer. (I tried to pry some lurid tales of the fashion world from her-but to no avail. I also resisted the temptation to ask her husband Ken). However, many of the skills that made her a successful fashion designer also contribute to the excellence of her work in law librarianship. Those fashion designer skills are definitely not going to waste.

She has served as a co-author for all iterations of the P-N guide. Partly because of her work on the guide, she was appointed as a member of the Program for Cooperative Cataloging (PCC) Standing Committee on Standards (an important and prestigious position).

Yael also founded and chaired the Genre/Form Terms for Law Material Project in 2008. "Genre/form terms" are used to describe what a work "is", rather than what it's about. ("Isness", rather than "aboutness", in her words). For example, "Horror films" would be used as a genre/form term for an actual horror film, not for a work about horror films. "Treaties" would be used for a text of a treaty or treaties, not for a work about treaties. Yael marshaled a group of opinionated catalogers through a thorough identification and review of suitable law genre/form terms, developing reference structures and scope notes as needed for those terms. On the way, she established an excellent working relationship with the Library of Congress' Policy Standards Division (PSD). Last year, LC approved the list of genre/form terms for law materials, and integrated the list into the genre/form authority file. The law genre/form thesaurus was one of the first genre/form thesauri approved by the Library of Congress.

Yael is now leading a follow up project: The AALL Law Genre/Form Implementation Project, with the ultimate goal of getting these genre/form terms retroactively into OCLC, and providing a metadata crosswalk that will be made available for libraries wishing to add the terms retrospectively to their OPACs.

She has recently concluded six years as AALL's Representative to ALA's Subject Analysis Committee, but continues as a key contributor to SAC.

Yael has given several presentations at AALL meetings on the best methods for batchloading vendor records, and has worked closely with Terry Reese, the creator of MARCEdit, on ways to de-dup records lacking unique numerical identifiers.

Yael is a frequent speaker at local cataloging groups in the New York City Metropolitan Area, especially the Big Apple Catalogers' Klatsch (B.A.C.K.). She has served as a mentor to many new law catalogers.

Looking at the Big Picture

Yael is a tireless and passionate advocate for "looking at the big picture": Don't just complain-try to fix the problem, at the network and national (even international level) if possible-rather than just tweaking your OPAC. "Looking at the big picture" applies not just to record creation and revision, but also to cataloging policies and standards.

Closing on a personal note: In addition to all her other formidable skills and accomplishments, Yael is an expert at "spatchcocking" helpless birds. For those non-cooks among you, don't get alarmed, a "spatchcock" is defined in Wikipedia as "poultry or game that is prepared for roasting or grilling by removing the backbone and sternum of the bird and flattening it out before cooking.