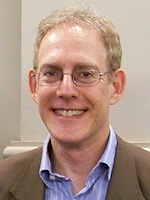 The Technical Services Special Interest Section Awards Committee is pleased to announce that the recipient of the 2012 Renee D. Chapman Memorial Award for Outstanding Contributions in Technical Services Law Librarianship is George Prager.

George Prager is Head of Cataloging and Assistant Professor at the New York University Law School Library. His professional activities, publications, presentations, and lectures are long and varied, including having served as the AALL representative to the Machine Readable Bibliographic Information Committee (MARBI) for five years. He is currently in the middle of his second term as chair of the TS-SIS Cataloging and Classification Standing Committee. George has served on many TS-SIS and Cataloging and Classification task groups and committees, including the TS-SIS Education Committee, the TS-SIS Strategic Directions Task Group, and the Law Genre/Form Project. In the fall of 2010 and the spring of 2011, he took a sabbatical leave and worked with Jolande Goldberg (Law Specialist, Library of Congress Policy and Standards Division, and past recipient of the Renee Chapman Award) to revise and expand the LC Classification sections for international criminal law (now KZ7000-KZ7500), and to evaluate the corresponding subject headings. In the fall of 2011, he took two weeks of academic leave to work with Jolande and the LC Law Cataloging Team on the reclassification of materials into the new LC classification schedule for Indigenous Law of the Americas (KIA-KIX).

Under the aegis of the Library of Congress, George has been active in the Program for Cooperative Cataloging (PCC). He has been a long-time NACO names and series trainer and reviewer. He served as the co chair of the PCC Provider Neutral E Monograph Record Task Group. With co chair Becky Culbertson (University of California, San Diego), they were able to complete the Task Force’s discussion, write the Provider Neutral E Monograph MARC Record Guide and have it approved by the PCC Policy Committee and the Library of Congress Standards and Policy Division. For their work, George and Becky were awarded a Certificate of Appreciation from the Program for Cooperative Cataloging in July 2009. He also served in the summer of 2011 as co chair of another PCC task group that revised the Integrating Resources manual. In the spring of 2012, George is chairing two PCC RDA task groups.

In addition to his impressive service record, George has added valuable contribution to the professional literature through numerous publications and articles. His notable contributions to various aspects of technical services are evident in his professional lectures and presentations, including a series of lectures on international developments in cataloging and RDA in both Italy and China.

George’s work and service to the law library community and technical services librarianship are exemplary, and represent the Renee D. Chapman Memorial Award in its finest tradition. The TS SIS Awards Committee is pleased to recognize George Prager with this award.

At the end of last year’s business meeting, George was standing on the podium, embarrassing me with accolades and superlatives. I have waited a whole year to get back at him, so I’m relishing this moment.

It is my utmost pleasure to present this year’s Renee D. Chapman Award to George Prager. George’s list of contributions to our profession is staggering in both its length and its breadth, spanning many years, multiple topics, and a range of library organizations. His ability to move seamlessly between different library associations and institutions has greatly benefitted members of TS-SIS. He brings broad perspective and context to law cataloging and looks out for the special needs of the law library community when working with non-law groups.

Time is too short to list here all of George’s presentations, workshops, committee work,, PCC training, and publications, so I will only highlight a few of his many accomplishments.

George has an in-depth knowledge of both the theoretical and practical aspects of bibliographic control and a comprehensive understanding of the MARC format. His keen interest in MARC deepened when in 2006 he was appointed the AALL representative to MARBI, a position he held for six years. During those years he kept us up-to-date on changes to the MARC format through extensive reports that helped elucidate some of the more complex issues at hand. Although following the technical MARBI discussions can be quite challenging at times, George never seemed at a loss. He even persevered when the Germans were in the process of adopting the MARC21 format and people were staggering out of the MARBI meetings with glassy eyes and stunned expressions.

In addition to maintaining the MARC Remarks column of TSLL, George has been a tireless contributor to other TSLL columns, and most recently delighted us with two fascinating accounts of his adventures during his sabbatical. The first article covered his time in Beijing, where he was invited to deliver a series of lectures on current cataloging topics. The second detailed his work with Jolande Goldberg on two LC classification projects: the expansion of the International Criminal Law section in class KZ, and the new KIA-KIX classification for Indigenous Law of the Americas.

In the past few years George has become a more visible player in the national arena, especially in PCC – the Program for Cooperative Cataloging. In 2008 he joined forces with Becky Culbertson from UC San Diego to form and co-chair a special PCC task group charged with exploring an alternative to a cataloging practice that required the creation of separate bibliographic records for multiple iterations of the same digital resource. The outcome was the Provider-Neutral E-Monograph MARC Record Guide, a new national standard that was a big step towards reducing the number of duplicate records in our shared bibliographic databases. In July 2009, George and Becky received a PCC Certificate of Appreciation for their outstanding work on the provider-neutral standard.

With RDA implementation around the corner and many of us struggling to understand how the new rules will affect us, George’s RDA expertise is proving invaluable. Many here have attended his excellent presentations on RDA at AALL and at various venues in New York, and I have no doubt that we’ll greatly benefit from the many RDA record examples prepared by the PCC Standing Committee on Training’s Task Group on RDA examples, which George chaired. Next to be tackled is the RDA version of the BIBCO Integrating Resources Manual, a particularly important document for law catalogers, since it describes how to catalog websites, databases, and our beloved loose-leaf publications. George co-chaired the previous revision of the Manual and will no doubt apply the same high standard to the writing of the RDA version.

I know that many of you are familiar with George’s keen intellect and razor-sharp wit. Many here recognize his innumerable contributions to AALL, and some may know of his outstanding work at other library organizations and institutions. But I suspect that few here are familiar with George’s less public profile, so I would like to touch upon some of his other talents, interests, and accomplishments.

George has always been deeply interested in languages and through the years had acquired knowledge of 15 languages, including Ancient Greek, Latin, Persian, Swahili, and Japanese. In fact, when he was attending Franklin & Marshall College, he decided to pursue a career in linguistics. Shortly after he made that decision, the head of the small Linguistics Department had a nervous breakdown, and although George was not entirely sure the two events were related, he decided to play it safe and buried himself in the Classics Department instead. He continued to pursue the Classics in graduate school, before finally succumbing to the lure of librarianship.

Another of George’s great passions is food. He is a member of the Culinary Historians of New York and is an extremely accomplished and adventurous cook. When he and his wife Satsuki traveled to China recently during his sabbatical, George discovered that he forgot his business cards and cell phone recharger, but remembered to pack his peppermill and extra fresh peppercorns. I recently learned that he keeps meticulous records of when he cooked a specific dish, for whom, with what side dishes, and the guest’s reactions. One of those archived recipes was for an elaborate dish of goose stew with radishes that took three days to prepare. It involved skinning, cracking bones, marinating the goose for two days, and reducing stock forever to create an amazingly rich demi-glace. Alas, all that labor was wasted on an unworthy date, and the scrumptious stew proved infinitely more memorable than the guest.

This account will not be complete without talking about hiking. It started when George joined the Appalachian Mountain Club in the hope of meeting women. I’m not sure how much his love life benefited from that move, but before long he became a passionate and skillful hiker and was seeking increasingly challenging mountains to climb in places like Nepal, Bolivia, Iran, Kyrgyzstan, Uzbekistan, Chile, Slovenia, and Morocco. He climbed the French and Spanish Pyrenees and broke his wrist descending from Mount Kenya, though he still managed to climb Mount Kilimanjaro on that same trip. But the most challenging by far was climbing 24,750 feet to the top of Muztagh Ata in the Xinjiang region of China.

George, for the sake of the library community, I hope you’ll stay close to the ground for the next few years, though you may climb up to the podium now to receive your very well-deserved award.