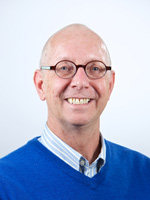 Richard is Director of the Law Librarianship Program at the University of Washington School or Law, where he also had previous roles as the Information Systems Coordinator and Assistant Librarian for Technical Services. He is strongly committed to professional service and has consistently contributed to the advancement of our profession through his committee work, scholarship, presentations, and mentoring activities.

Richard joined AALL in 1985 and the Technical Services Special Interest Section in 1991. Since that time, his service within our profession has been prolific, with a particular emphasis on mentoring and promoting the next generation of law librarians. Within TS-SIS, he served as a member of the Strategic Planning Committee and Bylaws Revision Committee, and he served as an editorial board representative for Technical Services Law Librarian (TSLL. He has also carried the technical services flag as a member and leader within numerous other special interest sections. He served on the OBS-SIS executive board from 2001 to 2006, including as Chair in 2005-2006, and was a longtime member of the OBS Education Committee. He served as Vice-Chair and Chair of SR-SIS from 2010 to 2012, and also chaired its Standing Committee on Lesbian and Gay Issues. He has been an active member of ALL-SIS and the Automation & Scientific Development SIS.

Outside of AALL and TS-SIS, Richard has served the profession in so many ways at each stage of his career. When he was at the University of Denver Westminster Law Library and the University of Colorado Law Library throughout the 1980s, he was a member and leader within the Colorado Association of Law Libraries (COALL) and Southwestern Association Law Libraries (SWALL) chapters, including extensive committee work and service on the COALL board from 1987 to 1990. When he moved to the University of Washington in 1992, he likewise became an active member of the Law Librarians of Puget Sound (LLOPS) chapter, where he was on the board from 2003 to 2006 and chaired its Membership and Nominations Committees, and of Innovative Law User Group (ILUG), which he also chaired in 1996-1997. He has been a prolific speaker, presenter, and panelist at programs and meetings for all of these organizations, among others.

Richard’s scholarly publications include several articles in AALL Spectrum, such as “Request for Proposal: using an RFP to select the best technology system for your library,” in March 2013, and ABA Journal will publish his forthcoming article on the skills and knowledge necessary for law librarians in today’s legal climate. His book, “Selecting and implementing an integrated library system: the most important decision you will ever make,” was published by Chandos in 2015. He has taught courses on library systems at the University of Washington Information School since 2001, and has developed a new model for the law librarianship program which was approved to start in the 2018-2019 academic year.

As Richard has transitioned from technical services and systems management into the directorship of one of the nation’s most prestigious law librarianship programs, one colleague noted that “it speaks volumes about the importance of technical services perspective, attention to detail, and vision that he has led the program so ably.”

In summary, Richard’s long and varied career is in the best tradition of technical services law librarianship. He exemplifies leadership, service, mentorship, and extensive contributions to educational programming. The TS-SIS Awards Committee is pleased to recognize Richard M. Jost with this award.