CONGRATULATIONS TO IRENE KRAFT! – THE RECIPIENT OF THE 2014 FCIL SCHAFFER GRANT FOR FOREIGN LAW LIBRARIANS 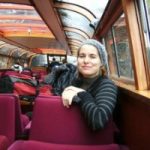 Ms. Irene Kraft is the Associate Library Officer at the International Criminal Court (ICC) Library, The Hague, Netherlands. In this position, she answers complex inquiries on foreign, comparative, and international criminal law, and is responsible for the reference and reader services offered to staff, interns, and visiting fellows at the ICC, including the Office of the Prosecutor, Chambers, and Defense Counsel. Her work includes implementing the ICC publication archive, and along with the ICC Head Librarian, developing the ICC Library Permanent Premises project.

Prior to joining the ICC Library, Ms. Kraft served as a Reference Librarian at the Chilean Library of Congress from 2008 to 2013 where she was responsible for U.K. and Commonwealth legal reference. She served as a member of the foreign legal reference team, assisting members of Parliament and in-house researchers. During this time she also co-wrote and submitted a paper entitled, Defining Effective Knowledge Management to Empower Citizens and Members of Parliament, for the 78th IFLA General Conference and Assembly held Helsinki.

Anticipating AALL & Returning to the ICC

Ms. Kraft hopes to gain expertise from other law librarians that are providing foreign, comparative, and international law library services, and make new contacts in the profession. Following the Annual Meeting, she plans to share her impressions and experiences with fellow colleagues at the ICC Library and libraries nearby.

Please join us in welcoming Ms. Irene Kraft to San Antonio in July!