The Preservation Standing Commitee's 2016 Worst Book Contest Winner is the Supreme Court of Ohio. Their entry, The Acts of the Parliament of Scotland, v. 2, published 1814, was submitted by Erin N. Waltz, Library Public Services Manager.

Erin writes "This book was damaged in a flood from a broken water pipe about 20 years ago and left to dry and fall apart on its own. It is in four pieces and has mold, water damage and decay." 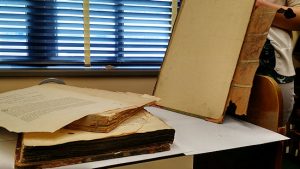 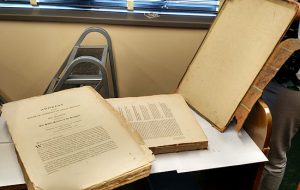 Scroll down to see the other 2016 contest entries from:

"This is a copy of The Reports of Cases Argued and Determined in the Supreme Court of Ohio, Volume 64 from 1903. This poor book was beaten up and left in a box in a dank and dingy basement. The binding has fallen apart, pages are ripped from it, the outside casing has fallen off and falling apart. It makes me sad to find this, but I had several to choose from -- this is truly one of the worst sad books I've come across." 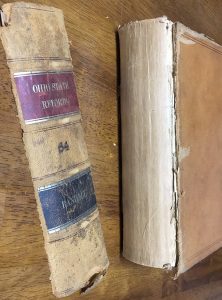 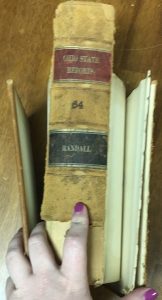 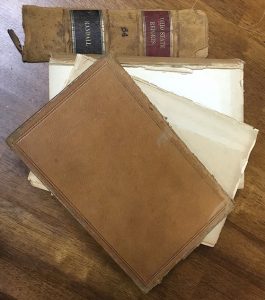 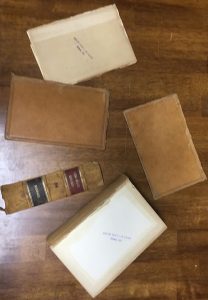 "This is a set of books on the testimony on impeachment before the Oklahoma Legislature in 1923. As you can see they are heavily water stained, page edges and the interior spine have been 'repaired' with tape, and the covers have completely been covered with clear book tape." 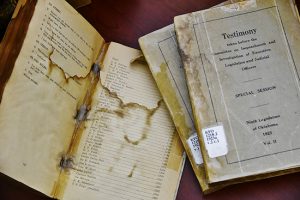 "This is a copy of The compiled laws of the territory of Dakota, A. D. 1887. The covers are loose, and have been 'repaired' with brown book tape in the past. The interior pages are stained and foxed." 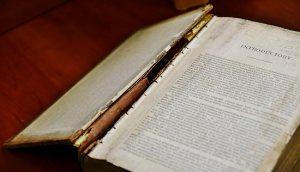 "I am sending a picture of one of the many badly damaged books the Multnomah Law Library holds. The book is volume 2 of Commentaries on the laws of England, by Sir William Blackstone, Knt. The First Worcester Edition ... by John Williams, Esq. Printed at Worcester, Massachusetts, by Isaiah Thomas, 1790. Both volumes of the set are equally water damaged and in poor condition. Background: Several years ago the county moved part of the law library's collection to a basement storage area near the river. Of course, there were floodings, and many of the boxes were damaged over time by the water, mold, insects, dirt, etc. Nothing was done with these boxes until this year. We found a number of very old volumes among the lot, all in very poor condition. This is representative of most of them."

"The San Francisco Law Library is one of the oldest law libraries in the west and the first county law library in California, started in 1870. Historically, the library was located in City Hall. The first San Francisco City Hall, and the library, burned to the ground in the big earthquake and fire of 1906. A new library was rebuilt in the new City Hall with generous donations from Attorneys General across the United States and also a relationship with an international legal publisher who brought rare and historical legal texts to our law library.

In 1995 the library was moved to temporary quarters as the city remodeled and seismically retrofitted City Hall. The temporary quarters were not large enough to accommodate the entire collection, so many volumes were put into storage. The rare books were sent to a special temperature-controlled environment, but many volumes were sent to random storage areas throughout the city. One storage area is Brooks Hall, located beneath a parking garage under the Civic Center Plaza in front of City Hall. The attached photos show the terrible conditions of hundreds of boxes of library books that have no room for a permanent home. The book, Voorhies' Annotated Code, Supplement from 1854, is a representative volume of what we found down there on a recent visit. Many of our boxes are placed around the pieces of a 1915 pipe organ from the Panama-Pacific World’s Fair! Sadly, our new space doesn’t have room for most of this older material and it is going to be a huge project to review and weed this sea of broken boxes and crates. 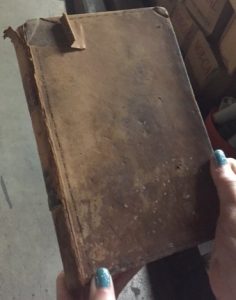 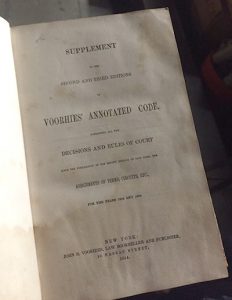 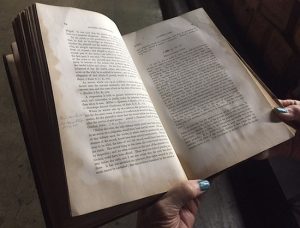 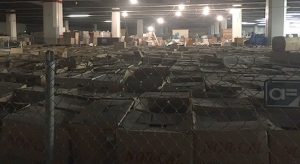 "The image is just some of the 170 damaged volumes retrieved from a U.S. District Courthouse. The library was able to turn this sad collection into a public relations success. More details in the LibGuide: http://libguides.law.uga.edu/c.php?g=491133." 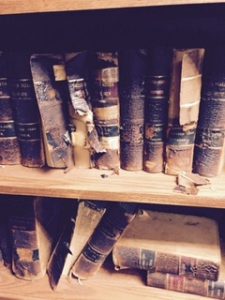 "A Typology of Domestic Violence (2008). Our copy was thoroughly analyzed by one very meticulous note-taking student." 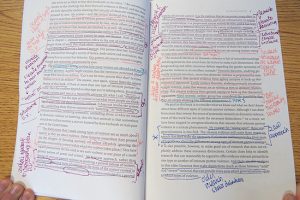 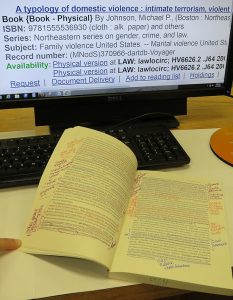 "The title of the book is The West Virginia Justice, being a complete guide for Justices and Constables of the state of West Virginia (1885) by W. Franklin, J.P. I hope you will consider our entry due it's age and many years of usage." 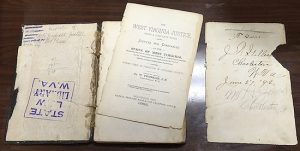 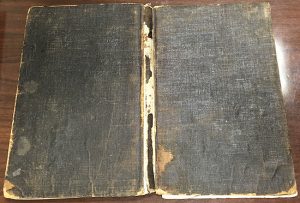